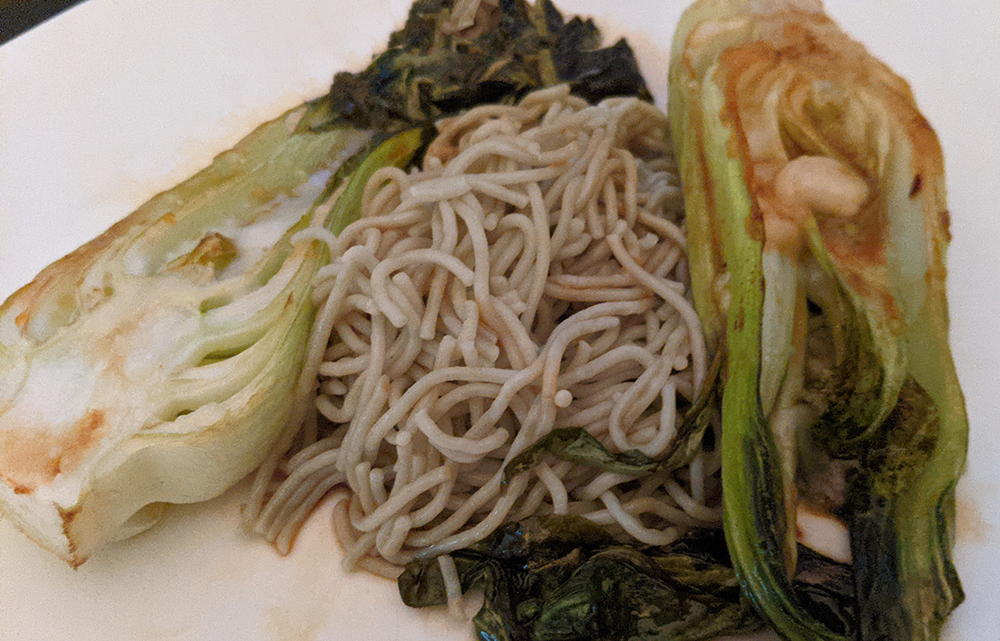 I really enjoy the taste and texture of Baby Bok Choy. This recipe takes the very best of the vegetable and adds a satisfying savory, spicy, with some subliminal sweet undertones.

Baby Bok Choy is a great source of Vitamins A, C, and K plus is extremely low in calories and only contains a tiny amount of fat.  The texture and taste of the green leaves are similar to spinach and the stalks are similar to celery.

It is good raw but much better cooked. Baby Bok Choy is a staple in Chinese cuisine.

You can also try to grill the prepared Baby Bok Choy on the grill. It was raining today in Southern California so I opted for the oven! To cut calories and fat, eliminate the vegan feta. 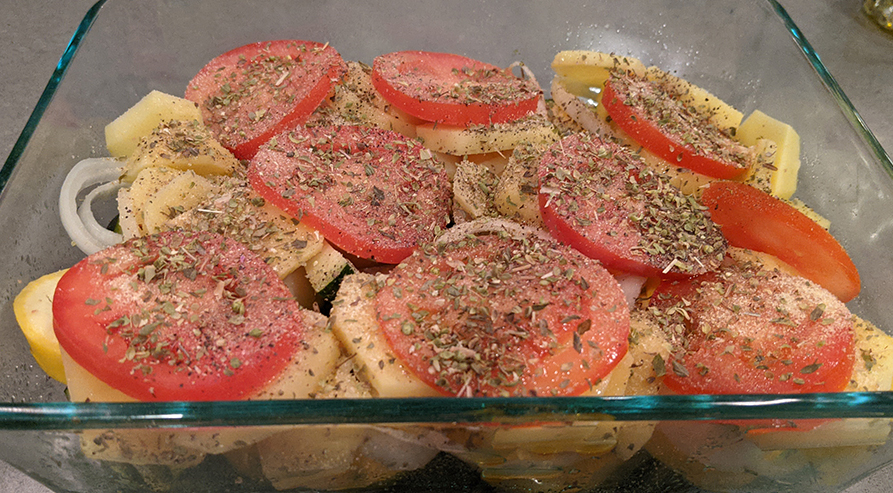 Zucchini is the star in this casserole with summer squash, potatoes, onions, and tomatoes in supporting roles. If you are not a fan of tomatoes, it is ok to omit them from the recipe. Also, if you do not particularly like summer squash, just replace it with more zucchini.

This recipe feeds 4-6 as a side dish and 2-4 as a main dish. I like to have it alongside a fresh green salad and some crunchy bread. It also makes a great filling for tortilla shells!

It also stores well in refrigerator, after baking, for about 3 days. 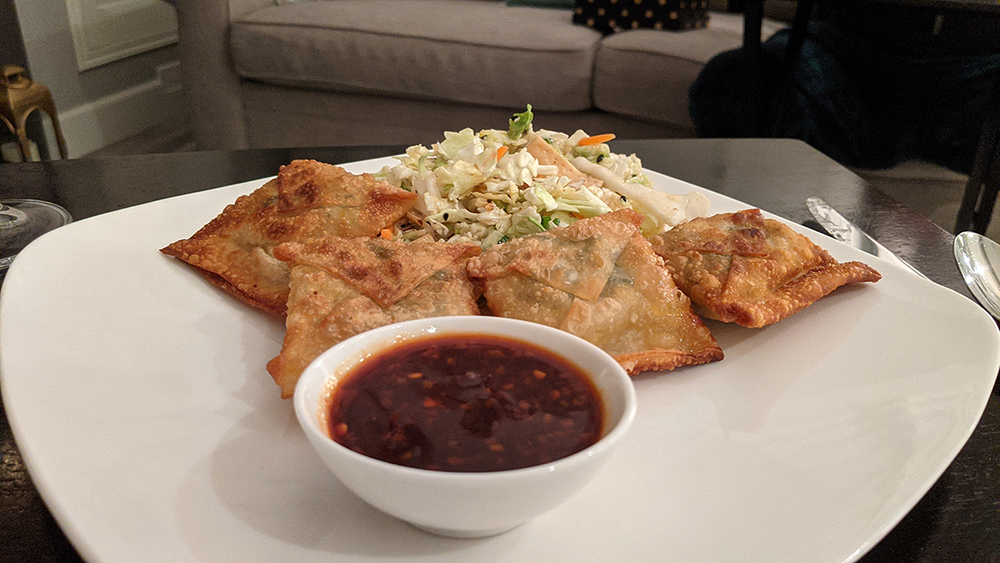 This New York Times recipe popped into my inbox a few days ago and I was excited to give it a try. I went to pick up some dumpling wrappers at Whole Foods and unfortunately, they only had eggroll wrappers.  Being a fan of Bob Ross, I subscribe to the saying that  “We don’t make mistakes, we just have happy little accidents!”

I followed the recipe for the “dumplings” but was not happy with the filling. It tasted bland and spicey. So, I decided to make some adjustments and the outcome was spectacular. 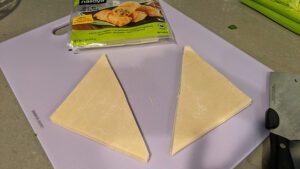 I’ve included a step-by-step picture tutorial on how to wrap the pockets. First, cut the squares into two triangles. Add a small amount of filling and fold over like shown in the pictures. Please use water and lightly coat the edges to make sure every side is sealed. 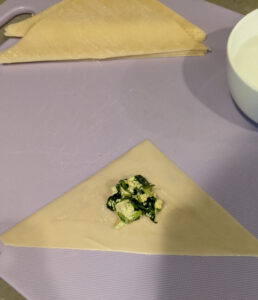 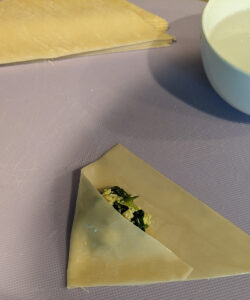 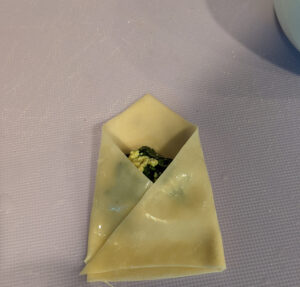 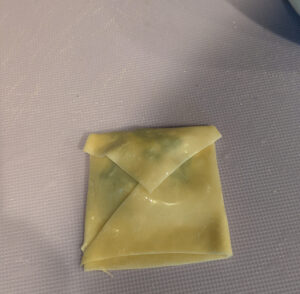 This does take a bit of time but makes enough to pop in the freezer for a quick, weeknight meal alongside a salad. 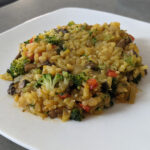 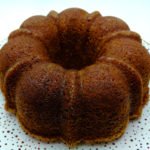 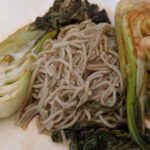 Hi Joe, terribly sorry. You should add the flour after the almond paste.Roxanne HollandFriday April 02nd, 2021
Flour is one of your ingredients. Does it get added to the recipe at any time? You don’t mention what to do with the flour.JoeMonday March 29th, 2021
Thanks so much beautiful lady! I am happy to help. I literally have over 100+ recipes more, just waiting to be posted. XOXORoxanne HollandMonday October 26th, 2020
Hi Roxanne! I'm printing recipes from your website to make this week! Thank you for sharing these :-) They are so yummy and it's been helpfu...Mary Jo ThorsonMonday October 26th, 2020
Hello Sonja, Yes, I love Miyokos Vegan Butter but find it to be somewhat expensive for a lot of my readers. I have tried monk fruit once but was not ...Roxanne HollandSunday January 26th, 2020
I love how your recipes are vegan but still feel like ones mom used to make. Sometimes other vegan chefs go a little too far with the healthy options ...SonjaSaturday January 25th, 2020
This recipe was outstanding. I used brown millet ramen noodles partly because I wanted more of a pasta type dish and partly because I forgot the rice...Angie RockwoodThursday September 20th, 2018
Took ingredients I had around — cooked couscous in veggie bouillon, mixed in chopped roasted peppers and their liquid in lieu of the lemon dressing,...ShannaFriday June 01st, 2018
Made this for a light refreshing dinner tonight and it was delightful! Served it warm with black pepper, pesto, and sprinkled with pignoli, and paired...ShannaFriday June 01st, 2018
We made this minestrone soup and it was delicious! Perfect winter meal.Renee RockwoodWednesday January 17th, 2018